The Art Of Networking: It All Starts With A Name 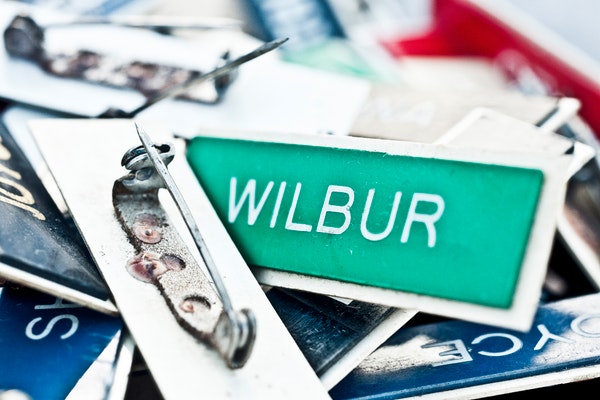 Even the most seasoned networker remembers his first solo event. Standing at the edge of the room, surveying the scene with eyes that wish they could be wide shut instead of glued open to the perfectly orchestrated chaos. The awkward handshakes where sweaty palms were forgotten until a moment too late, the classic conundrum of trying to read a nametag while still retaining eye contact, and let’s not forget waiting in line for 10 seconds of the keynote speaker’s time. Ah the joys of networking for the first time.

While the “good old days,” can be looked on fondly, I prefer to instead pave the way for future generations of networkers. Why go through the awkward first time phase, if instead you can have a simple playbook that will help you master the art of networking? If this sounds good to you, then by all means keep reading to learn why networking starts with a name.

Remembering Names … Without Looking At Nametags

When discussing names, I’m always tempted to quote Shakespeare … and then I remember that the rose line is overplayed and a bit clichéd. So, instead, I’ll start with my own name conundrums at Starbucks (yes, oh ye skeptical reader this is a relevant anecdote). The first memorable name mishap at Starbucks occurred with a good friend who happens to share my name, Laura. She said her name, the barista wrote it down. I said the same name, the barista wrote down “Gloria.” I was confused. Fast forward a few years when I was flying solo at a different Starbucks. I said my name, the barista wrote down, “Oura,” which to be fair is a cool name, albeit not mine. The point of these Starbucks anecdotes is that you must always say your name clearly, especially at networking events.

Now, when it comes to remembering the other person’s name there are three key tricks that you can use.

1. Repeat the person’s name immediately after the introduction. For example, “John, it’s a pleasure to meet you. My name is Laura.” When you finish the conversation, say the name one more time in closing.

2. Create a feature association with the person’s name. For example, John with the great jokes. A positive association (or a negative one, if you need to avoid someone during the event) is a great way to jumpstart your memory when you inevitably run into the same person later in the day.

Preparation … It’s Not Just For The Kitchen

Before you attend CMC 2019, take a moment to prepare. After all, networking without a plan is like going bird watching without binoculars, it might workout or you’ll be sorely disappointed. Preparation best practices include:

What To Say In The First 5 Minutes Of Networking

You’ve practiced saying your name. You know what tactics to use to remember other people’s names. You’re finished preparing for the event. Now what? It’s time to move beyond your elevator pitch. Remember, networking is about more than simply connecting business cards. If you are interested in solely building your contact database, then hop online and make new LinkedIn connections. However, if you want to actually build meaningful relationships then you need to learn how to overcome the awkward post introduction blues.

Avoiding conversation lulls is made easier when you go back to the basics. Who is someone? What do they do? Why are they at the event? Where are they based for work? How do they like the event? When would they like to connect after the event? You can always try making a joke. Although, if you are going to say something terrible about the polar bear’s weight and breaking the ice, then perhaps you should leave the jokes to the Comedy Speakers. However, if you know a great joke or are even good at making terrible puns, then you can always rely on a little humor to keep the conversation rolling. Finally, know when to end the conversation. Awkward lulls are easily avoided when you pick up on the social cues that the conversation has run its course. However, before you decide to walk away, don’t forget to exchange contact information; after all, you are attending a networking event, which means that at some point you do need to gather business cards.

CMC 2019 is the perfect chance to fine tune your networking skills. If you retain nothing from this blog post save for one thing, remember that the art of networking starts with a name. From saying your name clearly, to remembering the names of your new connections, names are the linchpin to networking success. Discover your inner networking genius when you attend CMC 2019!

Laura P has written 4,000+ articles, blog posts, product reviews, press releases, and website content for a multitude of clients. In the past 7 years, she has developed written, marketing, video, and web content for clients in the real estate, information technology, restaurant, auto, retail, equine sales, oil and gas, and public relations industries. Laura is highly proficient in SEO optimization, particularly in real estate and retail industries. She ghost wrote IT white papers, government contract task orders, RFIs, and RFPs that resulted in millions of dollars won. She has 7-years of experience working with and interviewing olympic athletes, small-business owners, CEOs, SMEs, and entrepreneurs on complex topics. As a professional writer, Laura strives to create content that is both meaningful and relatable to her readers.