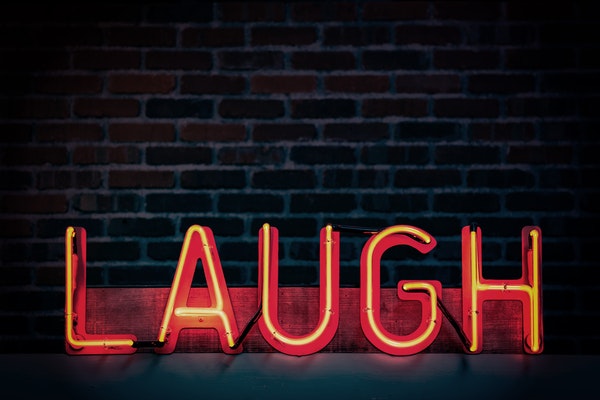 To successfully infuse comedy into a marketing campaign, you have to be more than funny – you have to have a serious understanding of business.

The speakers at this year’s Content Marketing Conference are hilarious and entertaining, but they are also gifted professionals. Many of the speakers have received formal training in the art of comedy, but most were happily employed in other professions when they realized they were funny.

Here are a few of the CMC’s Comedy Marketing Day speakers and their stories.

“Technically funny” Don McMillan graduated with a Master’s Degree in Electrical Engineering from Stanford University. Next, he joined AT&T Bell Laboratories, where he worked on the team that designed the world’s first 32-bit microprocessor. Computer geeks can tell you that this was a very big deal. McMillan then moved to Silicon Valley and designed 50 or so more computer chips, which also turned out to be big deals.

McMillan’s sense of humor became a big deal after he won the 16th Annual San Francisco International Stand-Up Comedy Competition in 1991 and became the $100,000 Grand Champion on “Star Search” in 1993. He then started showing up everywhere, from “The Tonight Show” to Budweiser Beer commercials.

Today, McMillan performs corporate comedy shows for some seriously huge companies, including IBM, Apple, Sun Microsystems and Cisco. He clings to his roots as an engineer, though, and uses PowerPoint presentations in his comedy.

Sarah Cooper was working away as a user experience designer for companies like Yahoo! and Google.

And then it happened.

She published a blog called “10 Tricks to Appear Smart in Meetings” and it went viral. Not just a little viral either – 5 million views viral! Inspired by her readers’ apparent need to seem savvier at corporate confabs, Cooper refashioned the blog into a full length book and gave it a new title, “100 Tricks to Appear Smart in Meetings: How to Get By Without Even Trying.”

Today, Sarah Cooper speaks about incorporating humor into writing. She also performs standup comedy in clubs and other locations in the San Francisco area.

Josh Bernoff has been a professional writer since 1982 and has co-authored three books on business strategy. One of his books, Groundswell, was a bestseller. He is also the author of “Writing Without Bullshit: Boost Your Career by Saying What You Mean” and daily blogger at withoutbullshit.com. His next book, “Truth and Influence,” is due out sometime in 2019.

Prior to becoming a bestselling author, Bernoff spent 14 years writing product definitions, online tutorials and press releases for technology startups. He also studied mathematics in the Ph.D. program at MIT and was a National Science Foundation fellow.

Prior to becoming the world’s first Humor Engineer, Andrew Tarvin managed million-dollar projects for Proctor & Gamble. He is also an accomplished funnyman, having performed in more than 1,000 shows internationally. Andrew also has a company, Humor That Works, which has already helped thousands of workers be more productive, less stressed and happier.

Tarvin combines his business background with his experience as a comedian to create engaging, energetic and effective programs that teach people how to get better results while still having fun.

Norm Laviolette has flourished as a performer, director, producer and entrepreneur during his twenty year reign in the entertainment business. Laviolette was a cofounder of the Improv Asylum, which started out as a tiny little theater in Boston and is now a multi-million dollar entertainment and training business. He also helped create the comedy club Laugh Boston, and became CEO of Asylum Gaming and E-sports.

Today, he shares some of his more effective improv tips and techniques that can transform a boring marketing campaign into a barnburner.

Nadya Khoja earned her degree in theater at a time when she had very little interest in acting and nobody was hiring anyway. Then Nadya heard the call of the wild – in digital marketing. She became the Director of Marketing for Venngage, where she multiplied the infographic and poster company’s revenue by 400 percent by using her company’s free infographic tool. She has now been featured in Forbes, Mashable, The Next Web, CBC News, Huffington Post and Entrepreneur.

Khoja also runs Drunk Entrepreneurs, a webseries and podcast in which she shares a few libations and secrets of success with industry leaders.

David Nihill graduated from UCD Michael Smurfit Graduate Business School in Dublin. One day, a dear friend suffered a spinal cord injury, so David offered to host a benefit comedy show – and then he remembered he had a crippling fear of speaking in public. Nihill had no choice but to pretend he was a world-famous comedian and talk his way onto comedy stages. He found that storytelling was the best way to connect with audiences.

Born in Ireland, Nihill now calls San Francisco home. He is the founder of FunnyBizz Conference and the author of the bestselling book, Do You Talk Funny?

Tim Washer spent two decades at IBM, Cisco and Accenture, but he was moonlighting as a comedy writer and funny guy in between his day jobs. Washer has studied under some of the best comedy and improv professionals out there, including Amy Poehler and the executive producers of The Colbert Report, Tom Purcell. Washer has also made appearances on Saturday Night Live, Conan O’Brien and HBO’s Last Week Tonight with John Oliver.

Tim Washer has also performed at corporate events at Cisco, IBM, Google, the Centers for Disease Control (CDC) and even at The White House. You heard that right – The White House.

While the speakers and keynotes at the CMC Comedy Marketing Day are funny and entertaining, they also have some serious skills when it comes to business and marketing.

CMC’s Comedy Day speakers are hilarious and fun, but they are also gifted professionals. Find out more here

To successfully infuse comedy into a marketing campaign, you have to be more than funny – you have to have a serious understanding of business. That’s why there are some seriously funny keynote speakers at CMC this year.