CMC 16 Session Recap: How to 10x Your Content Team’s Productivity 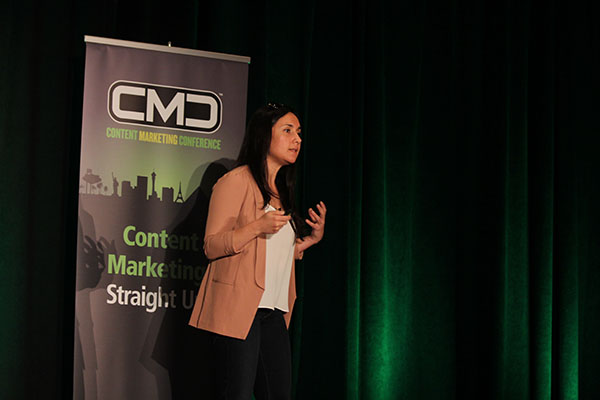 There are days when “productivity” seems like a four-letter word. According to the “How to 10x Your Content Team’s Productivity” session courtesy of Uberflip’s Hana Abaza at the 2016 Content Marketing Conference, there may be a few good reasons why we feel like productivity is a curse. For starters, 92 percent of marketers think they’re productive. That sounds all well and good, but now consider that 90 percent of those same marketers regularly work late into the evening and on weekends. Some 60 percent have delayed going to the bathroom in order to meet a deadline (I stopped drinking water a half hour ago just in case).

As Abaza astutely pointed out, when we don’t have time to pee, we have a serious problem with our productivity.

When More is Just More 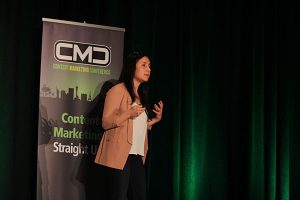 Not so much, says Abaza. We’ve lost quality in the face of quantity. It’s understandable, though; we’re faced with hundreds if not thousands of posts every time we sign into one of our social media accounts, and it’s natural to feel competitive. We want to cover the same topics, release new material with increasing frequency, retweet far past any semblance of our heart’s content.

The problem is that our branding suffers. More importantly, perhaps, as that our audience is suffering just as badly. From watered-down top 10 lists to “hacks” that are anything but enlightening to curated content that simply regurgitates the work of better, less taxed writers, many businesses are suffering from content bloat.

That’s the thing about productivity and quality – you need both. You don’t want Kardashian-esque content that’s everywhere but without any easily identified purpose. It doesn’t matter if everyone knows who you are if no one care.

The Ringelmann effect is a phenomenon in which individuals in a group become less and less productive as the group they’re in grows larger. Abaza’s tug o’ war analogy is classic: two people facing off one-on-one will fight tooth and nail to emerge victorious. Add four or five people to each side and it’s very likely that no one person is pulling with all their might. Everyone assumes that someone else is willing to pick up the slack.

For companies building a content marketing team, it’s important to construct small teams with big impact. Dung beetles can pull more than 1100 times their own body weight. Hire dung beetles, Abaza says. And she has a point. Writers that can also create graphics or set up social media strategies help streamline intraoffice processes. Fewer people equal less time a piece of content is passed around, less tendency to realize a blog feel through the cracks, less lag between an idea and its realization, less opportunity for someone to assume someone else is going to get it done.

Hire individuals and then design roles for them. People aren’t singular in their talents, and your job descriptions should be similarly diversified.

The Important of Psychological Safety

It’s a movie trope so common you have to have seen it more than once. The quiet kid who speaks up in class once only to be laughed at and recommit himself to silence until graduation. Sound familiar? When we breach the fragile confines of our own comfort zone, we’re putting everything on the table. In content marketing, though, that area a foot or two outside your comfort zone is quite often when creative magic happens.

If you want solid teamwork and inspired ideation, you have to protect your team’s psychological safety. Ask yourself:

Abaza spoke at length on the three pillars of stellar productivity: people, process, and tools. I’ve spent a lot of space here talking about people because they’re the so-called moving parts of content marketing, but she mentioned something about processes that resonated particularly well.

Traditionally, the creative process looks a little something like this:

It’s pretty and linear and easy to understand, but the results are similarly beige.

Abaza advocates a form of agile marketing that involves circuitous iteration. In other words, you put the following elements in a loop:

This never-ending loop can seem daunting, but in reality your team of dung beetles is well-equipped to handle it, and with better product emerging you’ll be less stressed about producing vast quantities of mediocre media. It’s the butterfly effect, content marketing-style.

Hana Abaza gave a comprehensive presentation far more detailed than can be duplicated here. Embrace the basic idea of quality over quantity and hire good people and you’ll be off to a good start. For everything else, you might have to come to CMC 2017 and see her in person.