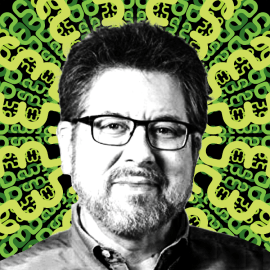 Josh Bernoff is an expert on business strategy. He is also passionate about creating “clear, brief, fascinating communication” by showing you how to eliminate the “bullshit” from your emails, reports and Web copy. He understands that in today’s world, your audience is constantly being bombarded by information in one form or another. So, it’s more important than ever to grab your audience’s attention and keep it with writing that sparkles and stands out from the crowd. Bernoff’s iron imperative when it comes to communication is to “treat the reader’s time as more valuable than your own.”

Bernoff is an accomplished author, who has been writing professionally since 1982. He has authored or co-authored six books on business, including Writing Without Bullshit, Boost Your Career by Saying What You Mean. In addition, Bernoff and co-author Charlene Li wrote the Business Week bestseller Groundswell: Winning in a World Transformed by Social Technologies, which educates companies on ways that they can profit from blogs and social media. Abbey Klaassen, the editor of Advertising Age, called Groundswell the “best book ever written on marketing and media.”

Bernoff also spent two decades writing and editing reports at Forrester Research, where he was a renowned technology analyst.  In his last five years at Forrester Research, Bernoff was the Senior Vice President, Idea Development, where he helped shape the company’s most influential ideas. He also created Technographics, which became Forrester’s successful consumer survey business.

One Man, Many Gigs

In addition to writing and ghostwriting, Bernoff also edits and helps shape the work of his fellow authors. He has, in fact, used his talents to refine more than 30 non-fiction books for other writers. Bernoff also loves sharing his expertise has made a number of appearances over the years, including at:

He has also keynoted major conferences all around the world in such places as Barcelona, Beijing, London, Tokyo and Sao Paulo.

Bernoff also publishes a daily column on his website about various subjects, including but not limited to politics, media and marketing. And while Bernoff may not sound like a man with much free time on his hands, he does have enough to be the CEO of wellnesscampaign.org, a non-profit organization that is “dedicated to the pursuit of wellness through changing habits.”

CMC is very excited that Josh Bernoff will be sharing his expertise and experience with our audience at what is now the largest gathering of content marketing professionals, executives and teams on the East Coast. You won’t want to miss CMC 2020, which will be held from April 21-23 at the Boston Westin Resort. So, register today!

Jane E. loves the art of writing — the challenges that come with crafting an article and finding the right angles. She also takes great pride in her work, so Jane will always take the time to carefully research each piece. Her passion has helped her to become a successful freelancer, and her work has appeared on a number of well-known sites such as the Huffington Post, AOL Travel, Popeater and Mapquest. Jane has been involved in publishing since her days in college. At Cal State University Dominguez Hills, she was the editor-in-chief and a writer for the school paper. After graduation, Jane worked for a number of years at different publishing companies, including Petersen Publishing, where she worked as a copy editor and editorial production manager.