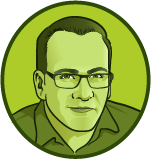 Named one of the “Top 10 Creative Canadians” by Marketing Magazine, Ron is an award winning writer, advertising creative director, and highly sought after public speaker.

Montreal born and Second City trained, Ron started The Tite Group 3 years ago with a vision to build a company that creates content people want to engage with – not have to engage with. Call it “branded content” or “sponsored content” – the name’s not important. The discipline, however, is.

Alongside running The Tite Group, Ron’s also the Executive Producer and Host of the Canadian Comedy Award winning show Monkey Toast, and has written for both television and the stage. His first book, Everyone’s An Artist (Or At Least They Should Be), will be published by HarperCollins in summer, 2016.